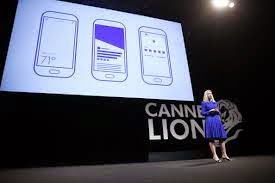 The San Francisco Chronicle on Sunday, August 24th, seemed to reflect a common observation in multiple stories or columns.

On the Chronicle's Page D2, an article originally from the New York Times told how tech entrepreneurs went to the weeklong Cannes Lions International Festival of Creativity (see the picture above), but declined to pay for a festival pass, because it just "cost too much." Too much, in this case, was about $4,300.

Perhaps most poignantly, Chronicle Editor John Diaz wrote an editorial on Page E2 that was titled "Where the kids aren't." Where aren't those kids? At sporting events, like 49ers football games held at their new, 1 billion dollar plus stadium. Simply put, they are just priced out.

Diaz' piece, in particular, projects the "it costs too much" phenomenon into the future. If kids don't get to go to sporting events in person, since their parents can't afford to take them, what is going to happen when those kids grow up? This is probably a good metaphor for the incredible income inequality so obviously present at the heart of our current economy and society.

It bodes ill for the future.

The economic arrangements we make, in the world we create, are changeable. If we want to have a future, we had better start making those changes now.