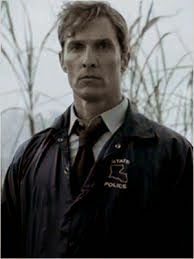 I decided I would try out True Detective, the HBO miniseries (or television drama, depending on how you want to classify it) that is in the running for one or more Emmys. I guess the results of the awards battle will be known this evening.

I am not much focused on the awards horse race, and I won't be watching the ceremonies on TV tonight, but I have been captivated by what I have seen so far of True Detective.

Sixteen minutes and eleven seconds into Episode One, "The Long Bright Dark," The Matthew McConaughey character, Rust Cohle (pictured above), makes this speech, answering a question from his partner (the Woody Harrelson character, Martin Hart). "What do you believe," Hart questions? Here's what Cohle responds:

I think human consciousness is a tragic misstep in evolution. We became too self-aware. Nature created an aspect of Nature separate from itself. We are creatures that should not exist by natural law. We are things that labor under the illusion of having a self, this accretion of sensory experience and feeling, programmed with total assurance that we are each somebody when, in fact, everybody's nobody.


Cohle's response to his partner is a pretty good statement about where we start going wrong, in thinking that we are somehow "somebody" and can separate our existence from the World of Nature. It's a "Two Worlds" mistake.

Another version of the same observation can be found in Genesis 3:22.