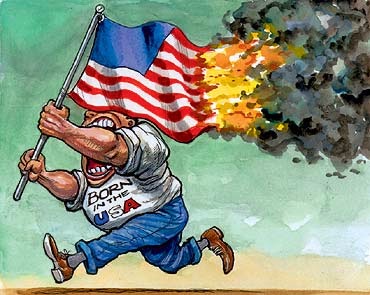 We make the world in which we most immediately live. What kind of world are we making? Governmental good intentions (if our government does, in fact, have good intentions, which remains questionable) are definitely not enough.

Intervening to "keep the peace" may be nothing less than incendiary, as pointed out so well by the letter that appeared in the August 22, 2014 edition of my hometown newspaper, the Santa Cruz Sentinel:

Is Panetta right on USA’s role in the world?

Leon Panetta strongly be­lieves that America must stay militarily strong and ever-pre­sent in the world to make it safe. However, an equal case can be made that our over-re­liance on military presence all over the world, our failure to re­ally understand other cultures and our arming and support­ing regimes and factions who eventually turn against us has caused us much harm.

America armed and trained Osama Bin Laden to fight against the Soviet Union in Af­ghanistan, but with our later military presence in Saudi Ara­bia, turned him into our deadly enemy. We overthrew Saddam Hussein based on the lies that he had weapons of mass de­struction and now look what we have wrought.

Our active support of pro­ western Ukrainians has now caused a civil war, and we blame it solely on Russia.

Our country’s infrastructure and standard of living is fall­ing while we pay billions to buy arm and friends around the world, and for what?

I don’t know that isolation­ism is the alternative to Pan­etta’s program, but an honest analysis of what our muscular foreign policy has cost us and won us over the past fifty years is definitely in order. Unfor­tunately, as much as I respect Leon Panetta, I fear he is pan­dering to our fears.


The Sentinel's editorial on August 19, 2014, to which this letter responds, can be found right here.