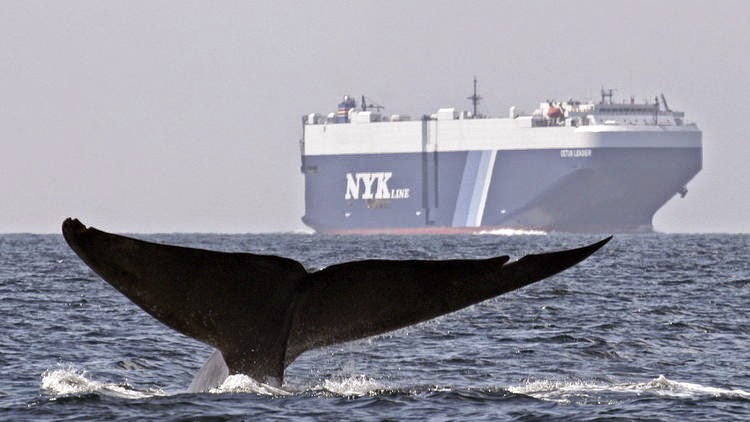 I emphatically do NOT want cargo ships to hit whales, injuring or killing them. Maybe I should thus feel unadulterated joy at a news story that ran recently in the Los Angeles Times.

The story, appearing on August 6, 2014, announced a new program that will pay shippers to reduce speeds in the Santa Barbara Channel, where injuries to whales are common:

Shippers will be paid $2,500 for each trip completed at 12 knots or slower through a 130-mile stretch from Point Conception to the Los Angeles-Long Beach port complex. Normal cruising speed is between 14 and 18 knots.

Lower speeds are expected to reduce the risk of ship strikes that are fatal to whales and could give the giant marine mammals more time to swim away from approaching ships. When ships travel more slowly, there’s an added benefit: Their enormous engines emit less air pollution.

Here is my problem with this well-intentioned new program. The program presumes that shippers have a right to run their ships at whatever speed they choose, no matter what the consequences to whales or air quality. If that is the presumption, then if we want ships to slow down, we have to pay the shipping companies to do the right thing. And, of course, this program is purely voluntary. What if the shipping companies decide that they would rather just run their ships at top speed, instead of getting the $2,500 payment? Well, no problem! That's their choice. Too bad for the whales, and for all of us who breathe the air in Southern California.

Another way of looking at this would be to decide that NO ONE has the right to do things that are likely to kill whales, or that contribute to air quality degradation, to the extent that this can be avoided. In other words, why not just tell the shippers that they can't go over 12 knots in the Santa Barbara Channel. This approach is called "regulation," and the idea is that we can establish rules that will achieve positive benefits, and that we don't have to pay people to follow such rules.

I consider this to be a "Two Worlds" kind of problem. If the World of Nature is preeminent, then activities in the world we construct, within the World of Nature, should be designed in a way that doesn't injure the Natural World. We make the "rules" in our world, and we can establish rules that protect Nature, if we want to.

On the other hand, if the "human world" is really preeminent, and more important than the Natural World, then it surely makes sense to "pay" people to do right by the World of Nature, since the World of Nature is in a secondary position to what humans choose to do.

In case you couldn't guess, I am on the side of regulation. I don't think we should be paying people to do the right thing, once we have identified what the right thing is.

I am happy for the whales in the Santa Barbara Channel (as long as the funding to pay off the shippers remains available, and as long as those payments motivate the right conduct by the shippers), but I truly deplore the idea that the whales (and air quality) don't come first.