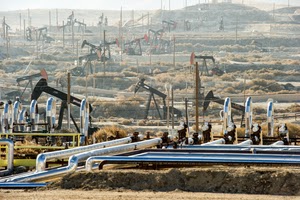 Naomi Oreskes, Professor of the History of Science and Affiliated Professor of Earth and Planetary Sciences at Harvard University, has written an article titled "Natural Gas: Green Bridge to Hell." I was alerted to the article because of its publication in Resilience. Professor Oreskes' article is a subject specific example of the "First Rule of Holes." If we want to move away from our dependence on hydrocarbon fuels, then we have to stop burning them.

In her article, which is worth reading in its entirety, Oreskes notes that the real impact of our increased production of natural gas as a "bridge" fuel is mostly likely not to wean us away from more carbon-intensive fuels, but to make it harder for renewable fuels to survive in the market:

Embedded in all positive claims for gas is an essential assumption: that it replaces other more polluting fuels. But what if it also turns out to replace the panoply of alternative energies, including solar, wind, hydro, and nuclear? In Canada, where shale-gas development is well advanced, only a small fraction of electricity is generated from coal; most comes from hydropower or nuclear power. In the U.S., competition from cheap gas was recently cited by the owners of the Vermont Yankee Nuclear power plant as a factor in their decision to close down. And while the evidence may be somewhat anecdotal, various reports suggest that cheap gas has delayed or halted some renewable power projects. It stands to reason that if people believe natural gas is a “green” alternative, they will chose it over more expensive renewables.

The "First Rule of Holes" is: STOP DIGGING!