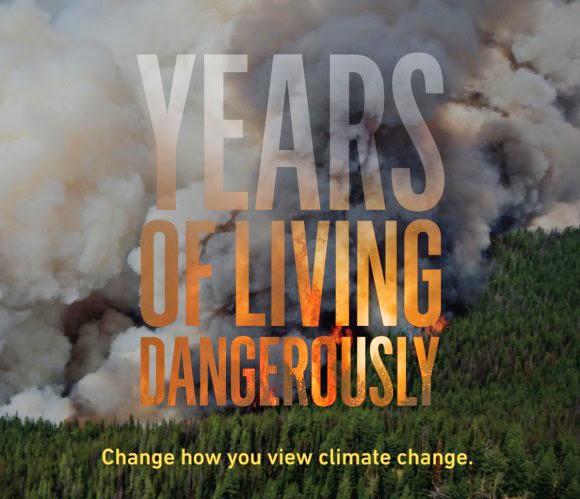 "Can there really be a connection between a drought and a civil war?" Thomas Friedman asks that question with respect to the civil war in Syria. Years of Living Dangerously, a new Showtime series, suggests that the answer is "yes."

Years of Living Dangerously is a kind of documentary, and what it documents is that the stability of our human-created world depends on the World of Nature. Syria provides one example. Plainview, Texas provides another. While Thomas Friedman acts like a foreign correspondent in Syria, Don Cheadle explores the connection between the "World that God created" and our human world in Texas, in a town where Bible-based churches play a leading role in the community, and a drought is destroying the town.

Indonesia was the location for the 1982 film, The Year of Living Dangerously, which starred Mel Gibson and Sigourney Weaver. It was "Year" in the singular in the title of the 1982 film, not "Years" in the plural. That is one way to distinguish the film from the more recent Showtime series. Besides the topic, of course, although the "revolution" motif is found in both. In the Showtime series, Harrison Ford goes to Indonesia to document the transformation of the Indonesian rainforests into Palm Oil plantations.

You get all that action in Episode #1. And you can watch that episode for free, by clicking the link. To learn more, and see subsequent episodes, you have to subscribe to Showtime and pay for the privilege.

My advice is to pay attention to the message, not so much the messengers. The message is pretty clear. "Dangerous" can hardly begin to describe the place where we're headed, and all because we can't seem to understand that our world depends on the World of Nature, or the World that God created (if you're from Plainview, Texas or have a similar sensibility).

"Years of living dangerously." That's another way to say "now."