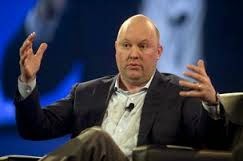 Pictured is Marc Andreessen. He is credited with being the co-inventor of the Mosaic web browser. Later, Andreessen was a co-founder of Netscape. Now he is a venture capitalist. The picture above was taken at a 2013 tech conference in San Diego. Andreessen was apparently captured by the camera as he was opining that it would be impossible to fix the technical flaws in the "Obamacare website," found at healthcare.gov. Click the link. Seems like he might have been wrong about that.

I first saw this picture affixed to an article appearing in the print edition of my local newspaper on June 6, 2014. The picture ran just above a headline announcing, "Marc Andreessen calls Snowden traitor."

When I saw the picture, and the headline, I wondered, "Who is this guy?" Based on my minimal research, documented above, I concluded that Andreessen is a rich guy with opinions. Having done that research, I found out a few days later that San Jose Mercury columnist Michelle Quinn pretty much agrees with that evaluation. Her judgment is that while maybe he will improve in the future, Andreessen's recent public pronouncements, delivered in connection with his active presence on Twitter, might properly be called "half-baked."

I don't have a general judgment about Andreessen's opinions, because I do not choose to "follow" the Twitter postings of rich guys with opinions. But just for the record, I think Andreessen is completely wrong about Edward Snowden. Not to mention self-contradictory.

Andreessen is quoted in the article as saying that he "wasn't surprised by the NSA spying. I ... thought that's what they were doing ... I thought everybody knew that." Well, Marc, if so, then how is the disclosure of what "everybody knew" the act of a traitor?

I don't think that Edward Snowden is a traitor. I think he has been trying to help American citizens, not betray them. The information that Snowden has provided may allow us to take the actions necessary actually to obtain the protections that we are supposed to receive through the Fourth Amendment to the Constitution. Any betrayals are more on the government side, than on the side of Edward Snowden, the way I see it.

I am not a rich guy with opinions, but I do have opinions, despite my less than billionaire status. It is my opinion that Edward Snowden's disclosure that the United States government is routinely depriving its citizens of what they have always assumed are their Fourth Amendment rights, is a good thing, and not a bad thing, and is most certainly not the act of a traitor.