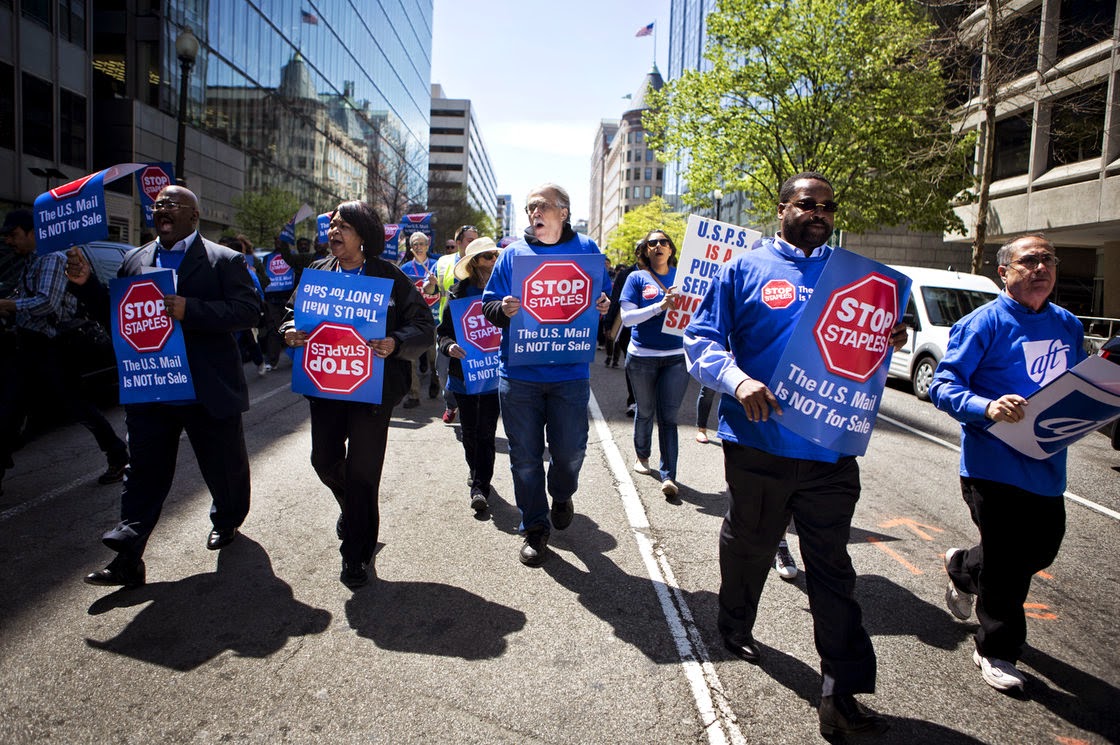 On Thursday, April 24th, postal workers took to the street to protest a decision by the U.S. Postal Service to open postal counters at office supply stores run by the Staples corporation. These new postal counters are to be staffed by employees of Staples, and not by governmental postal workers. As you can see from the picture, which appeared with a story on the NPR website, the protesters assert that "the U.S. Mail is not for sale."

I would certainly like to think that the U.S. mail is "not for sale." After all, one of the very few specific assignments given to the United States government in the Constitution is to "establish Post Offices and post Roads."

Article I, Section 8 of the Constitution ends up with an omnibus clause granting the government the power to make "all Laws which shall be necessary and proper for carrying into Execution the foregoing Powers, and all other Powers vested by this Constitution in the Government of the United States, or in any Department or Officer thereof." The implication of this "necessary and proper" language in Section 8, however, is that the government should have the maximum flexibility that it might need to carry out its basic governmental responsibilities. There is no indication that the Constitution contemplated a situation in which these basic responsibilities of government could be "contracted out" to private parties.

Read Section 8 at your leisure (it's reprinted below), and draw your own conclusions. But be aware, in case you haven't focused on this, that the current conceit seems to be that"private contractors" can carry out basic governmental functions better than the government itself. The example of what's happening to the Postal Service is alarming enough. But note that the government has already contracted out the job of raising and supporting the Army.

It might be time for the citizens of this country to demand that we get back to the basics, because it almost seems like government itself, in its totality, is now being sold to the corporations.

At least as I read Section 8, that doesn't seem to be what the Constitution is talking about!

To borrow Money on the credit of the United States;

To regulate Commerce with foreign Nations, and among the several States, and with the Indian Tribes;
To establish an uniform Rule of Naturalization, and uniform Laws on the subject of Bankruptcies throughout the United States;

To coin Money, regulate the Value thereof, and of foreign Coin, and fix the Standard of Weights and Measures;

To provide for the Punishment of counterfeiting the Securities and current Coin of the United States;

To promote the Progress of Science and useful Arts, by securing for limited Times to Authors and Inventors the exclusive Right to their respective Writings and Discoveries;

To constitute Tribunals inferior to the supreme Court;

To define and punish Piracies and Felonies committed on the high Seas, and Offences against the Law of Nations;

To declare War, grant Letters of Marque and Reprisal, and make Rules concerning Captures on Land and Water;

To raise and support Armies, but no Appropriation of Money to that Use shall be for a longer Term than two Years;

To provide and maintain a Navy;

To make Rules for the Government and Regulation of the land and naval Forces;

To provide for calling forth the Militia to execute the Laws of the Union, suppress Insurrections and repel Invasions;

To provide for organizing, arming, and disciplining, the Militia, and for governing such Part of them as may be employed in the Service of the United States, reserving to the States respectively, the Appointment of the Officers, and the Authority of training the Militia according to the discipline prescribed by Congress;

To exercise exclusive Legislation in all Cases whatsoever, over such District (not exceeding ten Miles square) as may, by Cession of particular States, and the Acceptance of Congress, become the Seat of the Government of the United States, and to exercise like Authority over all Places purchased by the Consent of the Legislature of the State in which the Same shall be, for the Erection of Forts, Magazines, Arsenals, dock-Yards, and other needful Buildings;--And

To make all Laws which shall be necessary and proper for carrying into Execution the foregoing Powers, and all other Powers vested by this Constitution in the Government of the United States, or in any Department or Officer thereof.