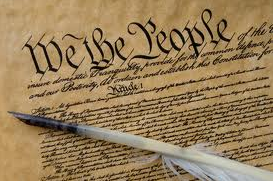 Roger Berkowitz is the Academic Director of the Hannah Arendt Center for Politics and the Humanities at Bard College. In one of his recent "Weekend Reading" columns, Berkowitz argues that American Exceptionalism is threatened by the rise of the National Security State.

What is the connection? The connection, Berkowitz says, citing Hannah Arendt, is that what has made the United States "exceptional" as a nation has been the fact that our Constitution rejects state "sovereignty" in the name of democratic self-government:

The great and, in the long run, perhaps the greatest American innovation in politics as such was the consistent abolition of sovereignty within the body politics of the republic, the insight that in the realm of human affairs sovereignty and tyranny are the same.

Arendt understood that what truly made America exceptional was its decentralized system of power, that the states did not surrender their powers to the Federal government, but that that Federal government should check the powers of the states and the considerable powers that still remained with them. By multiplying power sources, the American constitutional republic created a system that both prevented one sovereign power from acquiring tyrannical power and, equally importantly, insured that local power structures would persist that would give individual citizens reason and incentive to engage in the American practice of democratic self-government.

I have pretty much said the same thing before.

"Homeland Security" is simply not compatible with democratic self-government. This means that if we don't understand that Edward Snowden is a modern day counterpart of Tom Paine, we're going to lose our "exceptional" status.

Plus a whole lot more!