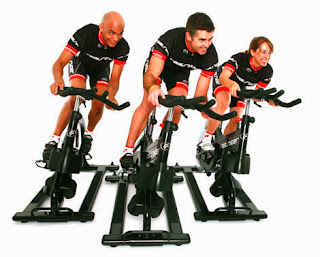 I first came across the word "stationarity" in an article written by environmental attorney Roger Moore. His article was one in a series titled "Cry Me A Reservoir," published in the Summer 2013 edition of Environmental Law News, the official journal of the Environmental Law Section of the California State Bar.

In Moore's article, "stationarity" is called a "lingering ghost" of the the twentieth century, the essence of the concept being that the past provides a reliable way to predict the future, because things are more or less "stationary." In an era of climate change, the concept of "stationarity" no longer applies with respect to water supply planning. That was the main point of Moore's article.

In our times, the concept of "stationarity" doesn't much apply to anything else, either. The realities that we have assumed are "fixed" are anything but. Vertiginous change is the "new normal."

Maybe that's why taking a ride on a stationary bike has become so popular. You get the exercise, but you don't change position. There is some comfort in that, since that' is definitely not the way it's working in the real world. Quite the opposite. You don't have to do anything, and everything changes around you.

I kind of liked "stationarity," but let's face the facts. That was then; this is now.