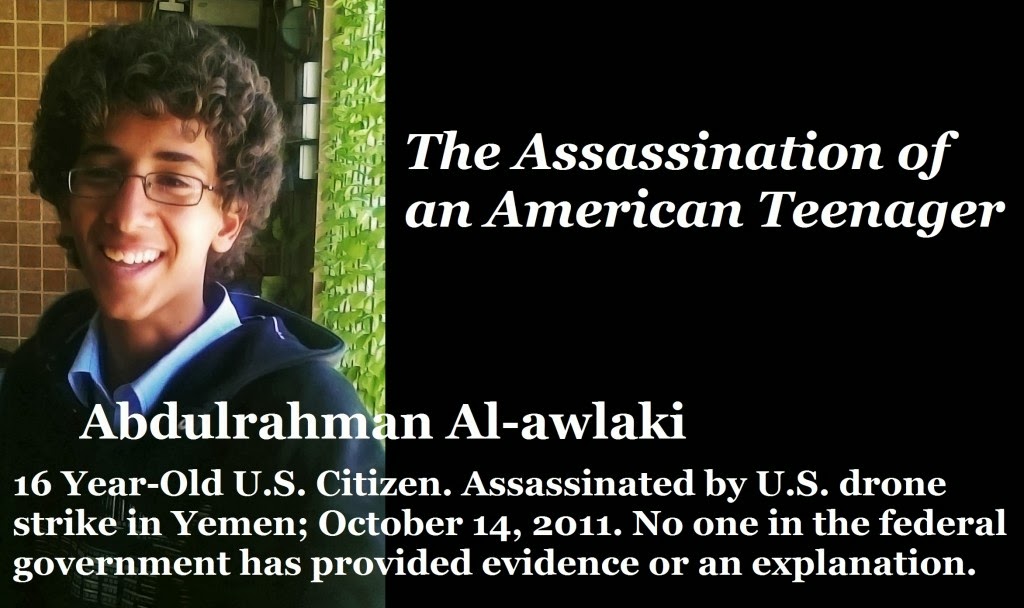 I have finally finished Dirty Wars, a 642-page book by Jeremy Scahill. Among other things, the book tells the story of the assassination of Abdulrahman Al-Awlaki, born in the United States. This teenager was killed by a U.S. drone strike (and killed on purpose, it appears, and not by mistake). He was not, as far as anyone knows, involved in any anti-U.S. activity whatsoever. He did happen to be the son of Anwar Awlaki, another United States citizen assassinated by the direct order of President Obama. The father's death was celebrated in public by President Obama, Secretary of State Hillary Clinton, CIA Director Leon Panetta, and United States Senator Dianne Feinstein. The son was killed a couple of weeks after the father, in a completely separate incident.

If you haven't read Scahill's book, I encourage you to do so. There is a movie, too, made from the book.

It's important for the American people to know when the president can kill an American citizen, and when they [sic] can't.

Would that be pushing the Fifth Amendment too far?


Amendment V
No person shall be held to answer for a capital, or otherwise infamous crime, unless on a presentment or indictment of a Grand Jury, except in cases arising in the land or naval forces, or in the Militia, when in actual service in time of War or public danger; nor shall any person be subject for the same offence to be twice put in jeopardy of life or limb; nor shall be compelled in any criminal case to be a witness against himself, nor be deprived of life, liberty, or property, without due process of law; nor shall private property be taken for public use, without just compensation.