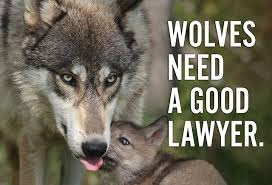 The Winter 2013 edition of the Earthjustice Quarterly Magazine is devoted to a celebration of the Endangered Species Act. Earthjustice, which used to be the Sierra Club Legal Defense Fund, is now an independent nonprofit organization. The Earthjustice motto is "Because the Earth Needs A Good Lawyer."

Wolves need a good lawyer, too.

In the magazine, there is a special feature on wolves. Since my family and I were just in Yellowstone National Park last year, seeing real wolves (through spotting scopes), I paid particular attention.

In the 1920's, thinking it was doing something good for the environment, the federal government permitted the extermination of Yellowstone's gray wolf, leading to a trophic cascade:

It turns out that human efforts to "run" nature, by killing off wolves, unravelled the web of life that supports all living things.

A brand New Year is coming up. Now would be a good time to make a resolution that we will resist the temptation to think that human beings should be in charge of the Natural World. Each of us, individually, could pledge to ourselves to do something about that. For instance, we might each provide financial support to groups like Earthjustice. You can donate to Earthjustice by clicking this link.

The Earth needs a good lawyer.

And we need the Earth.