#359 / Something Is Happening Here 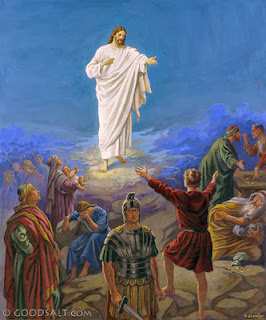 The Christmas stories that are most familiar to us come from Matthew and Luke. We hear about Mary and Joseph, the Wise Men, the angels, the shepherds, and the manger. We are informed that the whole pilgrimage to Bethlehem began with a decree that went out from Caesar Augustus that "all the world should be taxed."

Maybe that detail of the story is why Christianity seems to have been so appealing to right-wing, anti-tax crusaders, who so often seem to combine extreme religiosity with anti-government resentment.

I can remember playing one or more of the roles in the typical Christmas Story in various Sunday School Christmas Pageants held at All Saints Episcopal Church, in Palo Alto. The whole cast of characters was there on stage, played by Sunday School students, and even a donkey was included, as I recall.

What I didn't hear about in Sunday School was anything from the Gospel of John. John more or less ignored the whole "Hark The Herald Angels" thing, and gave us a much more "philosophical" and "theological" account of the miraculous appearance of Jesus in the world. Mary's virginity, incidentally, was not a feature of the story, as John tells it (John 1: 1-18, The Word Made Flesh):

The same was in the beginning with God. All things were made by him; and without him was not any thing made that was made. In him was life; and the life was the light of men.

And the light shineth in darkness; and the darkness comprehended it not.

That was the true Light, which lighteth every man that cometh into the world.

Over the years, as my Sunday School days have passed from me, I find that I am ever more impatient with those who presume to be able to reduce the miracle of human existence to a human explanation. I am still paying attention to the Gospel of John, however. This world, this universe, was "made." That's what I believe. I don't think it was an accident. The miracle of human life is a miracle, indeed. I don't think it has resulted from random reactions, plus time.

There is a light that comes into this world. It lights us all.

In the words of our modern Shakespeare (and we would be wise to pay attention):

Something is happening here.

We don't know what it is. But today ... that is what we celebrate.