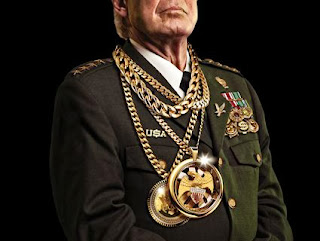 I don't know if my mother ever read George Orwell's 1984, but she definitely understood how language could be intentionally misused to support those in power, and to convince the "proles" that all the outrages of the ruling group were perfectly acceptable and normal. There was a question on the final exam in one of my Legal Studies classes about "false consciousness." The deliberate manipulation of language is one of the best ways to get there, as totalitarian governments (some of them posing as democracies) have long understood.

My mother definitely understood the principle. She strenuously objected to using the term "Defense Department" to refer to that agency of the United States government that used to be  called by its real name, the "War Department."

The change in title occurred in 1949, after the end of World War II, and just about the time that the United States government decided it was going to run the world from a military point of view.

It would be hard to justify all the things that the U.S. Military has been doing, almost everywhere on Planet Earth, if the actions had to be seen as activities of the "United States Department of War." Instead, we have a "Defense Department," and it's hard not to give some slack to a country that is just "defending itself." Surely that is what the United States government must be doing in all of its military operations, since it's the "Defense Department" that is largely overseeing these activities, which include the assassination of bridal parties in Yemen, and the deployment of heavily armed aircraft carriers around the world to "project American power" in trouble zones.

After all, "the best defense is a good offense," right?

Let's call the military bureaucracy the "Offense Department," just for the sake of clarity. If that doesn't offend you, I mean!

Postscript:
Mother Jones has a good article in its latest edition that details how the Pentagon is fighting back against proposed cuts in "defense spending." Reading the article is what reminded me of how my mother would regard this "defense spending" misnomer. Check the charts in the article. The United States government is spending more on its military than is spent by all of the next ten countries combined (and those include Russia and China).

We don't have enough money for health care, or to sustain our educational system, at any level. We don't have enough money to maintain our current infrastructure, or to provide unemployment insurance payments to people out of jobs. We can't undertake vitally necessary environmental restoration work, or provide housing for the homeless. But we can pay all the outrageously expensive bills of the military?

I think my Mom would agree. That's just offensive.