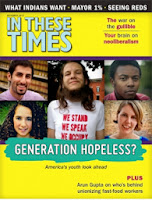 The December 2013 edition of In These Times has an article titled "Generation Hopeless." The article begins with an opening essay by Matthew Richards, who was arrested in October 2011 when he refused, along with other Occupy activists, to leave a park in his home town of Manchester, New Hampshire.

Richards' essay is then followed by a series of other essays, written in response to his.

Richards is twenty-two years old and concludes his piece by saying: "Now that I've already done my best to fix the world and it didn't work, I am at peace with the fact that it is no longer my job and won't be again."

Prior service does not result in any kind of work release. And the job is never done