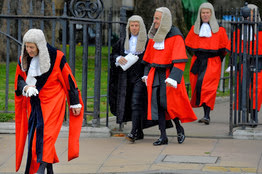 The idea that the "law" that governs society should come from a battle between private parties, carried out in court, is something that is uniquely part of our Anglo-American heritage. We are still largely governed by the "Common Law" that has been developed in just that way. In a recent article, Daniel Hannan links American "exceptionalism" to the "miracle of the common law."

Laws weren't written down in the abstract and then applied to particular disputes; they built up, like a coral reef, case by case. They came not from the state but from the people. The common law wasn't a tool of government but an ally of liberty. It placed itself across the path of the Stuarts and George III; it ruled that the bonds of slavery disappeared the moment a man set foot on English soil ...

John Adams wasn't exaggerating when he identified the Anglosphere's beautiful, anomalous legal system ... as the ultimate guarantor of freedom. [Quoting Adams]: "The liberty, the unalienable, indefeasible rights of men, the honor and dignity of human nature ... and the universal happiness of individuals were never so skillfully and successfully consulted as in that most excellent monument of human art, the common law of England."

Hannan mentions one other critical attribute of democracy in America:

At a time when most countries defined citizenship by ancestry, Britain was unusual in developing a civil rather than an ethnic nationality. The U.S., as so often, distilled and intensified a tendency that had been present in Great Britain, explicitly defining itself as a credal polity: Anyone can become American simply by signing up to the values inherent in the Constitution.

It has been a privilege to teach the principles of law to Legal Studies students at UCSC this Quarter, and to remind them that if there is any legitimate basis for what is called American "exceptionalism," that basis is found, most clearly, in our Bill of Rights, and perhaps more than anywhere else in the very first lines of the First Amendment:

This language in the First Amendment is what commits the United States to a "civil nationality," as opposed to a nationality based on a common tradition, ethnicity, culture, or religion. Ours is a democracy that welcomes all cultures and all peoples, and that celebrates diversity. What we have in common, as citizens, is a common law - and this common law is the law we make for ourselves.