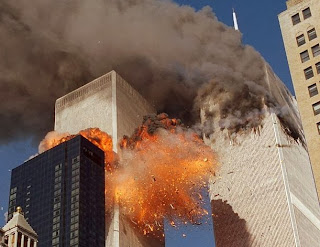 This picture, and a picture of the Japanese attack on Pearl Harbor, and a picture of John F. Kennedy, just before his car made the turn into Dealy Plaza, in Dallas, almost fifty years ago, illustrate yesterday's column by John Diaz, editorial page editor of the San Francisco Chronicle. Diaz' column was titled "Moments that changed us."

The changes that followed the destruction of the Twin Towers, on September 11, 2001, included the passage of the "Patriot" Act," signed into law by President George W. Bush on October 26th of that year.

On May 26, 2011, President Obama signed the "PATRIOT Sunsets Extension Act," which is a four-year extension of three key provisions in the Patriot Act. As explained in a Wikipedia entry, roving wiretaps are authorized; searches of business records (the "library records provision") are authorized; and conducting surveillance of "lone wolves" - individuals suspected of terrorist-related activities not linked to terrorist groups - is also authorized.

The latest version of the Patriot Act, as signed into law by President Obama, purports to authorize security agencies of the United States Government to "intercept" and to review every electronic message or other communication that you, or I, or anyone else in the world may send. That's what the Patriot Act means by "appropriate tools."

Many of our political leaders (including the President, of course, but also including California Senator Dianne Feinstein) think that this "change" in how the government relates to citizens is just fine. You don't have to be a Constitutional scholar to conclude that if this claim of authority is in fact upheld, the Patriot Act has pretty much abolished both the Fourth and the Fifth Amendments to the United States Constitution, and that it undermines other provisions of the Bill of Rights, as well.

I don't buy the idea that "events" change us. Changes that occur in the world we create, our human world, are the result of human choice and action. Events, of course, may motivate us to change, but when changes are made, we make them, and there is no "inevitability" involved. Whatever changes we have made, we can abolish or amend them. That's our choice, in the human world that we create.

It is probably time for a few more changes in what sort of "tools" we think are "appropriate" as we face the perils of the modern world.

Personally, I say we should go back to the Bill of Rights.