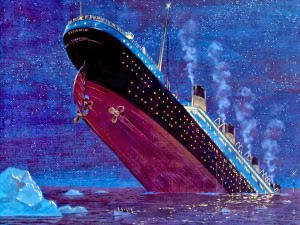 Steaming full speed ahead into an area of pack ice was not a good idea. Deadly in fact, but it seems that this is what was done. And that was called common practice at the time.

Had the passengers known of the dangers, I wonder whether they would have climbed to the bridge and demanded control? Taken over the ship themselves?

If you knew you were on a runaway vessel, and probably heading for an iceberg, it would be the right moment for the passengers to stop dancing, seize leadership, and assume command. At least, that seems right to me.

Same for the Titanic, and for whatever ship of state.