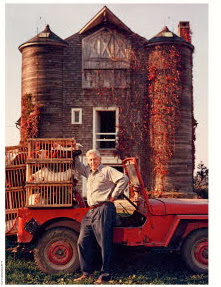 Henry Wallace served as Secretary of Agriculture under President Franklin Roosevelt, and he served as Vice President during Roosevelt's third term.

In 1936, Wallace wrote these words: "Probably the most damaging indictment that can be made of the capitalistic system is the way in which its emphasis on unfettered individualism results in exploitation of natural resources in a manner to destroy the physical foundations of national longevity."

The October 14, 2013 edition of The New Yorker has an article on Wallace, from which I took this quote. I certainly recommend the article, which was written by Alex Ross, who is actually best known for his music criticism, rather than his political criticism.

Given the themes I pursue in this Two Worlds blog, and on the basis of what he says in the quotation above, I am naming Wallace as co-editor (posthumously).