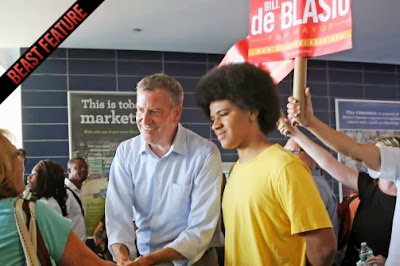 Pictured is Bill de Blasio, currently the odds on favorite to be the next Mayor of New York City. Standing next to him is his son Dante, who played a starring role in a political advertisement that helped propel de Blasio to a victory during the primary campaign. Check out the ad. It's pretty good!

The Daily Beast, whose motto is "read this; skip that," has recently published a long article called "The Rise of the New New Left." The article, by Peter Beinart, features the picture above, but concludes that Bill de Blasio's political success is not based on the fact that "he cut a sweet ad featuring his biracial son." The Beast sees a fundamental realignment of American politics in the offing, with the de Blasio primary victory being an early indication of some revolutionary political changes to come.

In short, according to Beinart, a "new" New Left is just around the corner. Maybe Beinart is right. It would be nice if he were, and I recommend the article. But while Beinart does make some good points, I tend to agree with Rick Perlstein, writing in The Nation:

Beinart’s generational argument is deterministic. It’s not about what the defining argument of the future will be. Young people’s ideological outlook seems to him already settled—leftward. That’s far too simple and optimistic.

History is not something that happens to us. It's something we make happen.

Nothing can be predicted with precision, and anything is possible.

If we want the kind of change that a "new" New Left would bring, we are going to have to make it happen ourselves. There isn't going to be any home delivery.