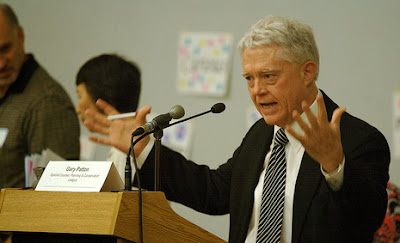 A funny thing happened to me the other day. A reporter for the Santa Cruz Sentinel, my hometown newspaper, called me up to ask if I were running for County Supervisor. Actually, a question about water policy was also a reason for the call. The reporter who contacted me, and who asked the question about my political plans, told me that the only declared candidate for the Third District Supervisor slot had told the reporter that I was going to be his competition. News to me!

Naturally, what I said to the reporter, as anyone with any political experience would almost automatically do, is that while I had no specific plan to run (totally accurate), I would "never say never."

In my view of our political world, where anything is possible, that answer is right on target. However, the "I have no plan to run" part of the answer is by far the more accurate, in terms of predicting any future campaign by me. I already was the Third District County Supervisor, for twenty years, and I have no plan whatsoever to run for that seat again.

Frankly, I was somewhat baffled where this idea might have come from (though I was flattered, after the newspaper printed a reference to my reply, by messages encouraging me to run). I think I have solved the mystery. A couple of friends who continue to be deeply engaged in local politics told me that a former member of the Board had simply "deduced" that I was planning a campaign to retake my old supervisorial seat. As it turns out, that deduction was way off the mark.

For friends and supporters: I have no plans, whatsoever, to run for the Third District seat on the Santa Cruz County Board of Supervisors in 2014. That's a great job, though, and I do encourage Third District residents who would like to make a difference in the community to think about running themselves.

And how about a woman candidate? Five white guys isn't exactly the kind of diversity we deserve!!