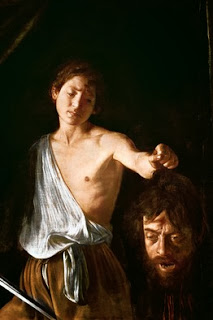 I sometimes feel guilty about getting my information about a book from a review of the book, instead of from reading the book itself. It sure is faster!

I recently read a review of Malcolm Gladwell's newest book, David and Goliath, which is subtitled, "Underdogs, Misfits, and the Art of Battling Giants." Gladwell's book propounds a theory of "desirable difficulty." At least, that's what Christopher E. Chabris says, in a review in the Wall Street Journal.

The concept of "desirable difficulty" is that when a person has a disability, or an impediment of some kind, that can actually stir that person to greater effort (and greater accomplishment) than would otherwise be the case, so that the difficulty ends up making it possible for that person to achieve much more than he or she would have achieved had the impediment not been present. In the review, at least, attorney David Boies provides the proof of the thesis, having risen above dyslexia to become one of the most successful and celebrated trial attorneys of our time.

Chabris doesn't really buy the argument, and the review pokes holes in the "desirable difficulty" thesis. Frankly, and again just basing my judgment on the review, Chabris does appear to make some good points. However, I think while he makes some points, Chabris may have missed "the point." Chabris' review faults the Gladwell book because the evidence adduced does not really support the thesis. In other words, Chabris is treating David and Goliath as though it were propounding a new sociological law, and Chabris thinks the evidence for that law is rather slim.

It could be, however (and this is what I suspect, not having read the actual book), that Gladwell isn't trying to prove some sort of sociological law at all. My bet is that Gladwell is simply telling stories that he thinks might have a positive motivational impact, so that when we face difficulties, we might decide that this could actually be an advantage, and we don't give up and stop trying. David didn't beat Goliath because he was smaller and weaker. He beat Goliath by trying to beat him, with the tools at his disposal. There was no "law" or guarantee that David would win, but he certainly wouldn't have won if he had decided he couldn't do it.

This idea of what Gladwell might be trying to do in his new book (I haven't read it) is certainly consistent with my understanding of the kind of "laws" that pertain in our human world. In the World of Nature, "laws" really do state inevitabilities. They are "descriptive," and they describe is what must and will happen.

In our human world, "laws" are not descriptive of what "must be," they are "prescriptive," and tell us what we want to do.

Do we want to turn our disabilities into desirable outcomes? I think so! And now Malcolm Gladwell is providing some examples of how that can be done.