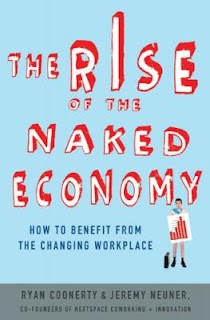 I enjoyed The Rise of the Naked Economy, by two Santa Cruz County authors. Our economy is definitely changing, and has been stripping away benefits and protections from working men and women. There is no doubt of that. Coonerty and Neuner provide some helpful and humorous advice on how those workers most affected can cope - and maybe even prevail. That's all to the good.

That said, let me express a significant concern about what seems to be the main message of this book, perhaps starting with the subtitle: "How to benefit from the changing workplace."

The workplace is changing, and workers need to deal with that, and to adapt and survive, in view of the changes underway. However, I would not be nearly so celebratory about the economic changes as these authors are. They (correctly, I think) describe the present economy as one in which we are all becoming atomized individuals, having to fend for ourselves, and they see this as something of a good thing - as something that is an actual "benefit" to the workers. I am less certain than the authors that this is actually a correct presentation of the bottom line for ordinary working men and women.

Certainly Coonerty and Neuner are benefitting from the "naked economy," because their business is based on providing a new workplace for those workers who have been stripped of their former status. The more such workers there are, the bigger the market for their new enterprise. Most workers, though, are probably not actually "benefitted" by the economic collapse that has eliminated pension plans, health benefits, and even stable office locations. At least, that is my view.

The Rise of the Naked Economy is a worthwhile "pep talk" for those most affected by our changing economy. Providing examples of those who have "made it" in this new economy, and who have actually improved their lives despite the immense challenges they faced, is a very helpful way to provide some much-needed encouragement to those now operating as "naked" individuals in an economy that provides less and less institutional support for workers.

But this "pep talk" for affected individuals should not, I think, be automatically transmuted into an argument that this "naked economy" is a good thing, and that this is what our society should be aiming for. I am a lot more persuaded by the ideas advanced by Gar Alperovitz, in his book, America Beyond Capitalism.

Alperovitz calls for collective efforts to redistribute wealth and provide the social benefits that have been taken away from ordinary working men and women. In other words, Alperovitz is calling for collective (including political) action, not more individual "entrepreneurship."

Our changing economy has turned working men and women into consultants and independent contractors, and stripped them of a stable "place" in our economy. This may benefit those who sell office space and associated services, but for those workers who have been kicked out of their former positions by downsizing, corporate reorganizations, and the export of American jobs to lower-wage nations, these alleged "benefits" will likely be realized only by the few, not by the many.

In short, I'm with Alperovitz. We, the working men and women of America, need collective action to take back the social and economic wealth that we have, collectively, produced.

I am not yet ready, for myself at least, to proclaim how great it is to walk around naked. We are individuals, but we are more than that.

We are in this together, and the economic challenges ahead must ultimately be faced on a collective, not an individual, basis.