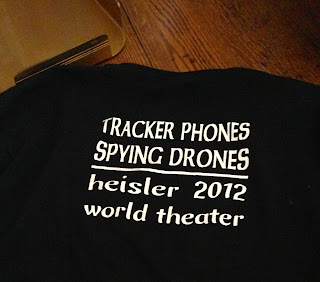 The Monterey College of Law holds an annual Moot Court competition. Last November, I reported on the 2012 MCL Moot Court, which focused on the following inquiry: "Can governmental authorities properly use cell phone tracking, predictive location programs, and drone surveillance techniques to spy on University students, and to use the information so obtained to break up incipient student protests, and to convict the students so identified of various crimes related to public disturbance?"

Shown is a picture of my personal T-shirt, a reminder of the 2012 Moot Court competition. By chance, I happened to be wearing that T-shirt on Friday morning, a week ago, when I read about President Obama's latest statement on the NSA documents released by Edward Snowden.

I was hiking in the Sierra on Tuesday, August 6th, so I missed the live version, but as I read about it on the following Friday, I understand the President went on the Tonight Show and told television host Jay Leno that "we don't have a domestic spying program.”

The United States government apparently intercepts every email, text message, and phone call from anyone in the United States, and then files the data, using that data when it decides it wants to. Those facts don't seem to be disputed, but the President asserts that this is not a "domestic spying program?"

Van Jones, one-time special adviser to the President, promptly and properly denounced this statement by President Obama. Let me pile right on. In fact, let me be frank.

A week ago Friday, I changed out of the first T-shirt, and put on another one, a gift from the League of Women Voters. That T-shirt is shown below.

As Tom Paine might have advised, we can't let ourselves be intimidated or tranquilized by Presidential pronouncements (even if, as Van Jones said, we like that President).

Telling the truth is a first step to opposing illegitimate claims made by political power. 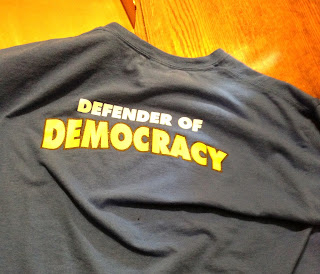