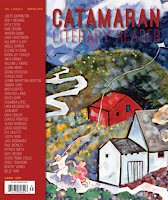 The Catamaran Literary Reader is published in Santa Cruz, California and celebrates both literature and the visual arts. The cover of its Spring 2013 edition is pictured here. That Spring edition contains an article called "Nature's Blinded Visionaries: John Muir, E.O. Wilson, and the Sixth Extinction." You can click the link to read the article. I recommend it.

Did you know that John Muir was blind, for some time, before he recovered sight and came to California? I didn't. Similarly, did you know that Harvard biologist E.O. Wilson, one of the world's  greatest living scientists, also lost the sight in one eye, when he was quite young? This is another story I didn't know. It was a blindness that transformed his life.

In an interview with Wilson, documented in the article, author John Moir explores the so-called "Sixth Extinction."


There is little doubt left in the minds of professional biologists that Earth is currently faced with a mounting loss of species that threatens to rival the five great mass extinctions of the geological past. As long ago as 1993, Harvard biologist E.O. Wilson estimated that Earth is currently losing something on the order of 30,000 species per year — which breaks down to the even more daunting statistic of some three species per hour. Some biologists have begun to feel that this biodiversity crisis — this “Sixth Extinction” — is even more severe, and more imminent, than Wilson had supposed.

What can stand against this cataclysmic loss of life, this massive extinction? Perhaps, we must rely almost solely on what Wilson calls biophilia, an "instinctive connection that humans seek with nature." Wilson believes that this feeling has biological origins.

Whatever the source of this feeling, we need to search for it within ourselves, to motivate actions in the world we create, the human world, that can help prevent the decimation of the Natural World upon which we ultimately depend. Moir's article concludes as follows:

Can we navigate our way through this crisis? Wilson thinks that the answer will be decided within the lifetimes of many of us alive today. We are the ones. The integrity of Earth's life and the destiny of the human species are in our hands.