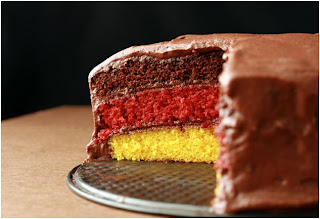 A week ago, I talked about our democratic self-government as being something like a three-layer cake. The ultimate power, of course, is supposed to be with the people.

The power relationship in our system of representative democracy is supposed to proceed in the following direction: People > Elected Representatives > Governmental Staff.

This kind of three-layer governmental system will produce democratic results only if power does flow in the direction diagramed above. We will only maintain democratic control over our government if our elected officials accurately and forcefully transmit to the staff the demands, and the questions, and the concerns of the public, and if the elected officials require the staff to be responsive to the public, and to whatever concerns may be uppermost in the public mind.

I noted last week that the actual conduct of any specific local City Council or Board of Supervisors might be different in real life, with the polarity shifted in the opposite direction. The reality is that all too often the elected officials (supposed to represent the public) end up representing the staff, instead. Instead of demanding that the staff deal with what the public is saying, the elected officials end up telling members of the public what the staff is saying, and representing that the staff has it under control, and is doing a good job, and basically that "the staff knows best."

Having attended quite a few meetings of the Santa Cruz City Council over the past several years, focusing on a proposed desalination plant, UCSC growth, and miscellaneous water issues, I have seen this phenomenon of a governmental "polarity shift" up close in my own home town. A recent action of the Santa Cruz Cruz City Council has particularly dramatized just how much the polarity has shifted within the government of the City of Santa Cruz.

Here is a news article fully outlining the example to which I refer:

The morning after officers shot and killed a heavily armed man who had executed two Santa Cruz police detectives, Brian Fambrini returned to the small Eastside apartment complex he owns ... and discovered a war zone.

Garages used by his Doyle Street tenants were struck by the 54 rounds fired at the suspect by three Santa Cruz police officers and an off-duty Santa Cruz County sheriff's sergeant during a vicious gun battle on February 26th. Brick pillars and wood fences were riddled with bullets, and there was other damage throughout the five-unit property stemming from the investigation.

The Fambrinis were left to make all of the needed repairs on their own, including having to clean up the gunman's blood and small pieces of flesh, left behind after crime scene investigators departed.

When the Fambrini family asked the City to pay them about $5,000 for the expenses they incurred in this clean up work, the City Council refused.

Note the polarity of these communications. One might have thought that the Council would hear from the Fambrini family, decide their claim was reasonable, and then tell the City staff that whatever the legalities might be, the Council was going to direct the staff to pay what would seem to have been a fair request for damages not caused in any way by the Fambrini family.

But that isn't what happened. "I'm kind of shocked why they would walk away from something like that," Fambrini said, explaining how he cleaned up the property with water, bleach and a broom. "I sanitized it as much as possible and threw it all away."

Great outrage at this treatment of the Fambrini family has been expressed by the public, and by the local newspaper in an editorial statement yesterday. I imagine that the Council will reverse itself, in this instance.

The "polarity problem" in our local government remains.

The Fambrini case was just one dramatic example of a persistent reversal of the correct polarity. The Council continues to take direction from the staff, instead of telling the staff what the people say.

Maybe some larger changes in direction may come from this dramatic example of a polarity running the wrong way.