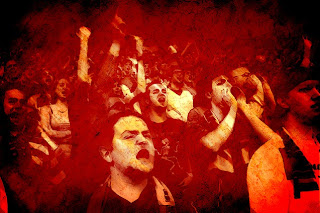 The image above is from an article published by Truthout on Monday, June 15th. Truthout describes itself as "a 501(c)3 nonprofit organization dedicated to providing independent news and commentary on a daily basis." The article under the image is entitled, "Why Aren't Americans Fighting Back?"

The "fight" metaphor is somewhat off-putting to many. I know this because I tended to employ the metaphor pretty consistently when I was serving as an elected official in Santa Cruz County, California. My reputation for reasonableness was somewhat affected by my choice of words. Although I think that I was mostly "reasonable" in advancing my personal proposals for public policy, calling the decision making process a "fight" made lots of people uncomfortable. In fact, it made them want to avoid the fray, instead of getting personally involved, and yet the essence of democratic politics is our personal involvement in the decisions that will shape our future. The lurid picture above, "Rage in Red," is probably not that attractive to many who will see it. The idea that Americans should become an enraged mob, shouting in the streets, is not generally appealing.

With that point made, the article in question raises issues that I have been reading about in scholarly books that do not employ the "fight" metaphor, but that deal with the same, serious question raised by Truthout: Why is it that the American public is apparently willing to allow 1% of the population to control the vast majority of wealth produced by our collective work? The article says that the British aid agency, Oxfam, has determined that the 2012 incomes of the 100 wealthiest families in the world would be enough to end global poverty four times over. There are a lot of Americans on that Oxfam list. Economically and otherwise, everything is falling apart for us - and we all know it - so "why aren't Americans fighting back?"

I am going to continue to ponder that question.

Most importantly, we all need to be thinking about how we might present the issues in a way that will motivate real, resolute, and responsive public action, as opposed to inciting the public to "rage." Disregarding the "fight" metaphor utilized in the article, our success in finding the right answer to the political question raised by Truthout may well determine the fate of our human civilization.