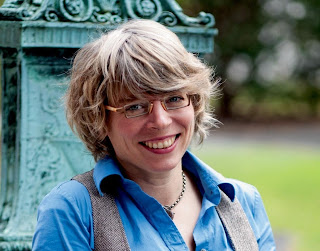 Jill Lepore, pictured, has written an excellent article in The New Yorker about the now infamous Prism Program. Her article appeared in the June 24, 2013 edition of the magazine, and is headed, "Annals of Surveillance."

I enjoyed Lepore's historical perspective on the problem of secret spying by the government on the communications of its citizens. She begins her article with a description of what happened when the British Government was caught opening the mail of Giuseppe Mazzini, an Italian exile in London who had revolutionary sympathies. The very idea that the government would secretly open and read the private mail of members of the public "stirred a public uproar." In the United States, where the case was followed closely, the New York Tribune called the opening of Mazzini's mail a "barbarian breach of honor and decency."

The thing I liked best about Lepore's article was not its historical researches, though I thoroughly enjoyed the historical commentary. I most appreciated her insight on the rather ironic position in which our contemporary public may find itself, as it protests about our ever-growing lack of privacy in a world in which public disclosure is ever more sought after.

In the twentieth century, the golden age of public relations, publicity, meaning the attention of the press, came to be something that many private citizens sought out and even paid for. This has led, in our own time, to the paradox of an American culture obsessed, at once, with being seen and with being hidden, a world in which the only thing more cherished than privacy is publicity. In this world, we chronicle our lives on Facebook while demanding the latest and best form of privacy protection - ciphers of numbers and letters - so that no one can violate the selves we have so entirely contrived to expose ...


There is no longer a public self, even a rhetorical one. There are only lots of people protecting their privacy, while watching themselves, and one another, refracted, endlessly, through a prism of absurd design.