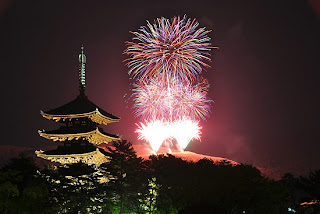 On July 4, 1968, I had just met Marilyn Dilworth, the woman I would marry a little over a year later. We were both participating in the Volunteers in Asia summer teaching program. Marilyn would spend the summer teaching English and working with young children in Hong Kong. I spent the summer teaching vocabulary at Linson College, in Macau.

On July 4th, we had not yet reported for our teaching duties, and we found ourselves, along with other VIA participants, on Mount Koyasan, where we were staying at a hostel. Mount Koyasan is the holy center of Shingon Buddhism in Japan, and we had been told to be reverent, and on our best behavior.

I had already been attracted to Marilyn, but I must say I paid even more attention to her after she set off fireworks, to celebrate the Fourth of July. The roofs of the temple structures at Koyasan were made of thatch, as I remember it. There was probably scant danger, but Marilyn really shouldn't have done it. It was not really "reverent," and the Fourth is not a Buddhist day of celebration. Marilyn is, however, nothing if not exuberant, and she has always loved fireworks. She loves them to this day. Local ordinances or not, Marilyn provides fireworks on the Fourth.

Not this year, though (at least, probably not). Marilyn and I are currently in Ireland, visiting places demanding reverence for their literary associations. But if you hear of fireworks at Trinity College, Dublin, don't tell the cops!