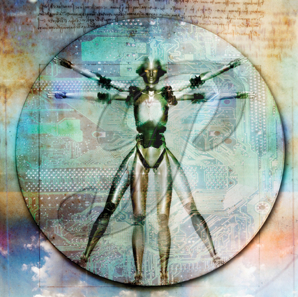 A recent edition of the blog published by the Hannah Arendt Center for Politics and Humanities at Bard College talked about the transhumanism movement, described as follows by Wikipedia:

Transhumanism is an international cultural and intellectual movement with an eventual goal at fundamentally transforming the human condition by developing and making widely available technologies to greatly enhance human intellectual, physical, and psychological capacities.

Ray Kurzweil, about whom I have written before, presumably flies under the "transhumanist" banner. He seems to think that the Natural World will ultimately become "superfluous." The discussion in the blog posting from the Arendt Center is consistent with this idea. In fact, it takes the Wikipedia definition one step further. "Greatly enhance" is not really enough. The Arendt blog announces that:

The ultimate goal for transhumanists has never been merely to improve mankind, but to defeat our greatest opponent: death

I question this idea, that death should be seen as our "opponent."

If death is seen as our "opponent," however, this has great implications for our relationship to  the World of Nature. Death is, indubitably, the primary reality of the Natural World, the world into which human beings are born. If our own actions in constructing a human world within the World of Nature are to be understood, ultimately, as nothing more than our attempts to defeat death, then perhaps death should properly be seen as our "opponent." If we were to succeed in "defeating" death, that would, quite probably, as Kurzweil says, mean that the Natural World would become "superfluous," since death and the Natural World are so intertwined that you cannot have one without the other.

The article in the Arendt blog promotes the idea of science fiction as the source of the "technological optimism" that can help us, ultimately, defeat death (and make the Natural World superfluous).

I think that charts a false course forward. Far better to rejoice in the World of Nature as it is, the world that God made, the world that we do not make ourselves, rather than to scorn and reject it.

A world in which death has been "defeated," and the World of Nature has been made "superfluous," is a world, presumably, that is made of "synthetic" materials that are not subject to the rule of recycling and renewal that the transhumanists call death, and that is, in fact, the very definition of life itself.

That synthetic world, that world of plastic and synthetic biology, is not the world in which I want to live.

Our human freedom, which is our glory, allows us to construct whatever type of human world we will. But better a world that celebrates and reflects the World of Nature that contains it. When we call the World of Nature our "opponent," and seek to make it "superfluous," we turn our ambitions and our efforts against ourselves, for ultimately, we human beings are part of the World of Nature, too. To think otherwise is suggest that we are, and should ever more become, the science fiction monsters we imagine.

I don't need "transhumanism." Plain old humanism is good enough for me.