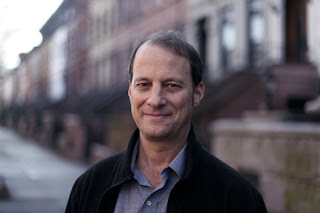 The May 27, 2013 edition of The New Yorker has an article by George Packer, who is pictured above. Packer is a 1978 graduate from Gunn High School in Palo Alto. Gunn was the rival school to Paly High, which I attended - albeit quite a bit before Packer attended Gunn. One might think that Packer, as a Palo Alto native, would have a flattering view of Silicon Valley, and of the new culture and politics it has generated.

Packer's article, titled "Change The World," is well worth reading. I would characterize the article as debunking the idea that our new digital economy (and online politics) are inevitably going to lead to the kind of social, political, and economic changes we need.

Young entrepreneurs who think that the "digital revolution" being pioneered in the Silicon Valley will lead, ipso facto, to some kind of positive, and benign, and "real" revolution in our society and economy are just not in contact with the genuine realities of either the Natural World, or the world we make. We do live in a "political world," and the changes we need to make are going to take real (and old-fashioned) political work.

Digital politics isn't some kind of automatic entre to a better world, or to a more just society, and digital politics aren't any more appealing than that digital food they're talking about!