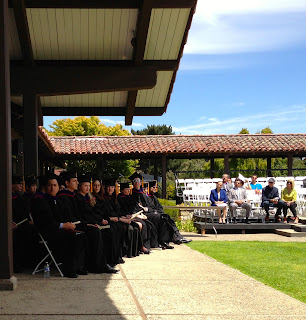 Pictured is the Monterey College of Law Class of 2013. Commencement exercises were held yesterday at Santa Catalina School, which is a pretty nice place to hang out on a beautiful day:

Since I am the current Chairperson of the MCL Board of Trustees, I gave a speech. So did Dean Mitchel Winick, and so did the official commencement speaker, State Senator Bill Monning. Monning, by the way, is a former teacher at MCL, and all the teachers at MCL are of stellar quality (those who teach there do that not as a full time job, but as a way to enrich their own lives, and those of the students).

Professor Stephen Wagner was honored by the students this year, and was presented with the Outstanding Faculty Award by graduate Christine Keyzers-Kelly. Wagner has also served on the MCL Board of Trustees, and is a former prosecutor who travelled statewide to assist local District Attorneys with complicated drunk driving cases, where a death had occurred. He also spoke to the graduates, after receiving his award.

All these speeches were good, and Bill Monning's speech, in particular, reminded graduates that the true aim and ambition of the law is justice. "Justice, justice thou shalt pursue" was his message, though not presented in Biblical terms.

For me, the highlight of the day was the Graduate Address presented by one of the graduating students, Isaí Ambrosio-Ramirez, who had been selected by the Class of 2013 to speak on its behalf. With amazing tact and sensitivity, and in an undramatic but powerful recitation, his speech celebrated and appreciated the unique gifts and contributions  of each and every student in the Class of 2013. He "named names," and made clear to all the families and friends gathered in the audience that these students had been successful because they brought their individual talents and gifts into a community, and that this Class of 2013, in its entirety, was indeed not simply a collection of individuals, but was a community in which individual contributions strengthened the whole.

I have written recently of a commencement speech presented by Governor Brown at UC Berkeley, and of a commencement speech by Robert Reich, a respected educator and public servant. These were good speeches, but seemed aimed, mainly, at the graduates as individuals. In his speech, Isaí Ambrosio-Ramirez reminded everyone (though never saying so outright) that our work and efforts, making great individual demands upon us, are perfected through our connections with one another.

That's a message worth hearing. And remembering.

POSTSCRIPT:
For someone looking for an extraordinary (and affordable) legal education, at what is truly an extraordinary law school, there is still time to enroll at MCL for the academic year that will start in August. Contact Dean of Admissions Wendy LaRiviere for more information.