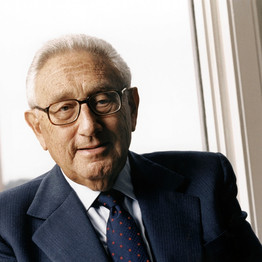 I am not a big fan of Henry Kissinger. It's personal.

During one of my years at Stanford (1963), I ran the Stern Hall "Guest in Residence Program." We invited notable persons to come to campus, to deliver a major campus/community presentation, and then to live in Stern Hall for several days, making themselves available to lucky dorm residents. Henry Kissinger participated in the program, and I was the one who made all the arrangements.

These arrangements included a contract, negotiated between Stanford and Dr. Kissinger's agency. Several days before he was due to show up, and after all the publicity had appeared, I heard from the great man that he was demanding travel expenses (not specified in the contract we had with him). We could take it or leave it.

We took it. Right up the you know where.

I did not appreciate Dr. Kissinger's negotiating style. However, remembering the incident, as the years went by, I fully understood how he liked to conduct diplomacy on behalf of myself and the other citizens and residents of the United States. He is, I gather, from a review of his book On China, a big fan of Mao Tse Tung, celebrating the Chinese leader's brand of power politics and excusing his excesses. Again, this is perfectly consistent with my own, personal, experience.

Let me speak to the merits and substance of the article that drew my attention. Having a "foreign policy," in the Kissinger tradition, and in the way The Wall Street Journal would like to see it done, means being able to "project power" throughout the world. A friend of Dr. Kissinger (Robert Kaplan, published on the website of the Center for a New American Security) explains the concept in his April, 2013 article entitled, "In Defense of Henry Kissinger." Nations need to be able to compel others to do what they want them to do (by the projection of power). Who really benefits?

American "projection of power" is impoverishing the world, and most Americans, and is making enemies everywhere. I am not a fan of that kind of "foreign policy," and it's way more than personal.