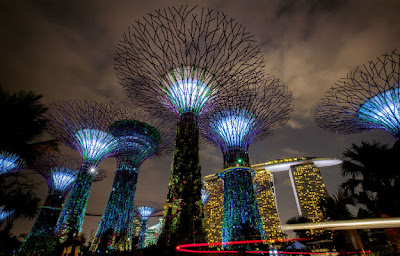 As reported earlier, I have placed a high value on "utopian" thinking since my undergraduate days, when I studied "Utopia" for two years as a participant in an Honors Program in Social Thought and Institutions. Given this background, I was interested in a recent article, published in Foreign Policy, that criticizes what the author calls "contemporary techno-utopianism." Foreign Policy, by the way, for those not acquainted with it, is  a web-based magazine that proposes "to explain how the world works," and in particular to explain "how the process of globalization is reshaping nations, institutions, and global cultures." If those topics sound interesting to you, you can "Follow" the magazine on Facebook, or sign up for a free newsletter.

In fact, I found little to disagree with in "The Singularity of Fools," authored by David Rieff. His complaint is with the idea that there is some sort of "technological fix" for all the world's problems. Rieff cites a book by Evgeny Morozov (To Save Everything, Click Here), as providing an appropriate antidote for the temptations of "technological solutionism."

I agree with both Rieff and Morozov. "Technology" is a human creation, part of our "human world," and many of our most pressing problems stem not from the absence of human activity aimed at changing that world, but from a basic failure to understand that "our" world is in fact utterly dependent on the World of Nature, the realities of which we are attempting to defy.

What really got me to look at "The Singularity of Fools," when a link for the article popped up on my computer screen, was the picture above. I immediately recognized the place, which I visited in February of 2010, while the "ship in the sky" casino (which is what is pictured) was still under construction.

A 2010 picture of the casino is below. It's in Singapore.

Our human "building projects," of all kinds, which include our "institutional" constructions, as well as physical ones, can often provide a glittering and brillant addition to our human world.

In the end, however, we live ultimately in a world that we did not create, and the laws of that world are not subject to human modification, or to the transformations of human technology. We forget this at our peril. If we fail to conform our actions to the natural laws that govern the World of Nature, within which our own world is created, all the brillant lights of technology will not avail us, or save our world from its doom. 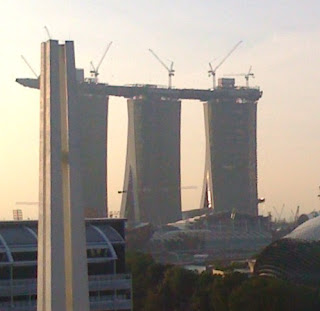