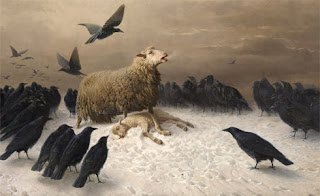 I was much moved not only by this image, titled "Anguish," but by the article it illustrated, "One of Us." The article appeared in the most recent edition of Lapham's Quarterly, and discussed the phenomenon of animal consciousness. The article suggests that many of the differences we postulate between animals and humans are not, in fact, based on any real difference. Animals have consciousness, have individual existences, and can communicate.

But in this we differ. Only humans presume to create a world of their own, separate from (though completely dependent on) the World of Nature, and to proclaim that human world more important than the world that in fact makes our lives, and the lives of all the other animals, possible.