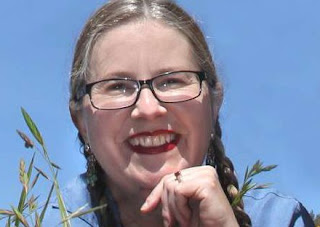 Patrice Vecchione, pictured, is a celebrated local poet (local to Santa Cruz, Monterey, and to the Monterey Bay Region in general). She has a new book out, The Knot Untied, and so has been appearing for readings around the Bay. She has also been appearing in newspaper columns.

According to the Monterey County Weekly, Vecchione's next reading will be at 3:00 p.m. on Sunday, April 7th, at the The Works, 667 Lighthouse Avenue in Pacific Grove. That's tomorrow. It's free. We are all invited.

According to the Santa Cruz Weekly, Vecchione says that "writing a poem is about taking something that is not primarily located in language and locating that thing in language."

I happen particularly to like that observation. It comports with my understanding of how we create the world in which we most immediately live, and it affirms my idea of what it means to be human, for our glory is to bring into reality the unspoken dreams and hopes of the human heart. "Words make worlds," as the Santa Cruz Sentinel has recently begun saying, promoting its advertising space.

May we all find ways to untie the knots that bind us to the dead and weighty worlds of our past, and to create the new worlds and new realities that will allow us, and our children, to have a future.

Poetry, indeed, could help untie those knots, because without the words that will precipitate them into reality our hopes and dreams will remain unrealized.