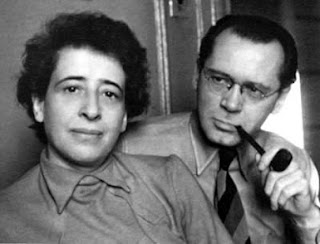 Pictured are Hannah Arendt and her husband, Heinrich Blücher. The blog posting from which I obtained this picture, written by one of Blücher's students, is worth reading, to get a sense of their relationship. Arendt, whom I consider to have been one of the greatest thinkers of the Twentieth Century (and why stop there) called Blücher the "love of her life," though many would say the love of her life was Martin Heidegger, the German philosopher who took up Naziism, and whom Arendt, in the end, apparently forgave for that.

I am currently reading a book about Arendt, Stranger From Abroad, which focuses particularly on her relationship with Heidegger. In that book I found the following quote from Blücher. Reading what he says here, about nationalism, makes clear to me how Arendt could have developed her passionate attachment to him. The kind of nationalism that Blücher discusses might be considered as a kind of political "virus," to which the United States, because of its unique political history, was initially immune. But is it still immune, or has the virus mutated within the American body politic, so we are now infected? This is a question worth considering:

Nationalism began when every individual, every small spirit, saw in it his chance to embody something higher than himself and to feel himself, as a German or whatever, to be greater than he could feel alone. What now marks the end of nationalism is that it has become impossible to be both a human being and a German, a Frenchman, or a Jew (in Israel, in any case) or whatever. On the contrary, as a representative of this or that nationality, one will be forced sooner or later to become an inhuman monster.

So we are obliged today to try to become human beings only as ourselves - aided by those friends who have been moved to make this same decision and supported not by the "great spirits" of Romanticism but by the great human beings of all our national pasts. And one's own as well as other "nations" should be judged solely ... in terms of the question: Where is the human being's person held inviolate?"