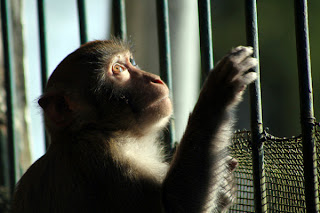 We need another and a wiser and perhaps a more mystical concept of animals … We patronize them for their incompleteness, for their tragic fate of having taken form so far below ourselves. And therein we err, and greatly err … They are not brethren, they are not underlings; they are other nations, caught with ourselves within the net of life and time, fellow prisoners of the splendor and travail of the earth.


Henry Beston  (1888-1968) was an American writer and naturalist. The quotation above was snipped from an article by Lewis Lapham, published in the March 2013 edition of Guernica. I commend that article to you. Lapham was formerly the editor of Harper's Magazine, and this recent article is titled, "The Conquest of Nature." Also worth reading, I think, would be Beston's most famous work, The Outermost House, which documents "a year of life spent on the Great Beach of Cape Cod." Sounds like Thoreau on the seashore. According to Wikipedia, Rachel Carson asserted that Beston was "the only author who ever influenced [my] writing."


Speaking now only of Lapham's article, I found it almost painful to follow his discussion of how humans have driven away Nature, and destroyed it, to replace the World of Nature with a human created substitute. His conclusion mirrors my own thoughts:

The environmental casualty reports filed from the four corners of the earth over the last two hundred years don’t leave much ground for argument on Montaigne’s question as to who is the beast and who is the man. Whether attempted by men armed with test tubes or bulldozers, the conquest of nature is a fool’s errand. However it so happens that the beasts manage to live not only at ease within the great chain of being but also in concert with the tides and the season and the presence of death, it is the great lesson they teach to humanity. Either we learn it, or we go the way of the great auk.