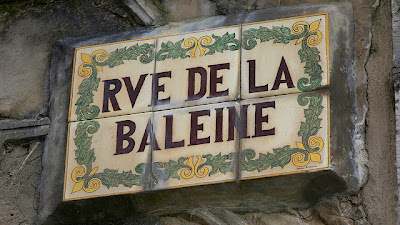 Once in awhile / We talk about poetry / And so it was / I learned a new word.

Yet how often
the heart
that sets out for Peru
arrives in China.


In this poem, the word "whale-roads" is a kenning, a type of literary trope. As Wikipedia notes, a kenning is a circumlocution, which presents itself in the form of a compound (usually two words, often hyphenated) that employs figurative language in place of a more concrete single-word noun. Kennings are strongly associated with Old Norse and later Icelandic and Anglo-Saxon poetry.

"Whale-roads" is a kenning, and that circumlocution means nothing more, nor less, than "the ocean."

This being true, what does that fact say about Hirschfield's poem? Did Hirschfield not understand that while humans can follow a "road," and maybe Geese can even follow some magnetic force that steers them straight, a "whale-road" is "the ocean," and it therefore makes no sense to say that Whales "follow" the ocean, because far from constraining their choice of destination, the ocean itself is freedom pure?

Or, is that the point of the poem? We think we steer by a chart and have a straight course, but when our hearts end up in China, instead of Peru, that may be a demonstration of a fundamental truth: whatever "road" we think we are following, that road does not constrain us, no matter how hard we steer. We are free to follow our hearts, wherever they take us, finding "whale-roads" of boundless opportunity.

Here is my favorite poem: