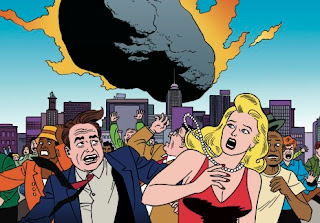 A meteor about fifty-five feet in diameter, and weighing about 10,000 tons, hit Russia last week. According to the Los Angeles Times, the best estimate is that the meteor released 500 kilotons of energy on impact. The Hiroshima A-Bomb released 16 kilotons of energy. Luckily, the area struck by the meteor was not much populated; however, significant personal injuries and property damage did occur.

The Los Angeles Times article wondered if there could be an "early warning system" for possible meteor collisions. No one interviewed in that article seemed to think that this was a very practical idea. Mike Brown, in fact, an astronomer employed at Cal Tech, said "there is no object floating in the sky that is worth worrying about." He is also quoted as saying that the event in Russia was "relatively mild." I wonder if he would have said the same thing if the meteor had happened to strike Pasadena. Of course, in that case, he probably wouldn't have been around to be quoted. It's questionable whether the Los Angeles Times would have been in circulation, either!

The New Yorker magazine got into the meteor threat some time ago, in an article published in February 2011. It was titled, "Vermin of The Sky." I found the article fascinating then, and am happy to recommend it to you now. You can check my postings of March 2, 2011 and March 3, 2011 for my earlier reflections on the topic.

I am also somewhat amused to think that the biological vermin that haunt human existence (think of the rats that carried the bubonic plague) are officially called "vectors," as in the phrase "vermin and vector control." With respect to the "vermin of the sky," their "vectors" are everything. As opposed to those quoted in the Los Angeles Times, The New Yorker article quotes people who think that it is worthwhile (and possible) to build and implement a system of "planetary defense" that would deflect asteroids and meteors, and alter their vectors, avoiding otherwise inevitable collisions. It would cost a lot of money to mount such a defense, though, and those darn vermin of the sky can sneak up on you so quickly that it's questionable whether we would actually be able avoid a catastrophic collision with NEOs (Near Earth Objects) like the meteor that recently struck Russia.

I am not convinced that there is any real answer to the threat from asteroids and meteors. The recent meteor strike in Russia is just one more example, in my mind, that we have built our human world, in many ways, in reliance on what amounts to the sufferance of the World of Nature. Our civilizations remain vulnerable, inevitably, to "vermin" of both the terrestrial variety, and those "vermin of the sky."