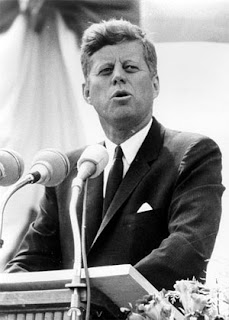 I have just read "In Sickness And By Stealth," a ruthlessly negative review of the Kennedy presidency by Christopher Hitchens. The essay is found in Hitchens' book, Arguably.

Even granting all the points that Hitchens makes, I think it is true that the American people continue to have a rather good opinion of President Kennedy.

If so, that good opinion may be based on the fact that President Kennedy did call the nation to rise to a common purpose. In fact, unless a nation has some sort of "common purpose," it is rather questionable why we would even need or want a "nation" at all. Looking around at the politics of 2013, it seems to me that lots of people are getting elected to Congress by making exactly that point: what good is this national government we keep paying for? It is just screwing up (in almost every possible way).

Frankly, it is hard to argue that the national government is not screwing up (in almost every way it possibly can). It is. So, why bother to keep it around?

A real national purpose permits, or even requires, that each one of us be personally involved.