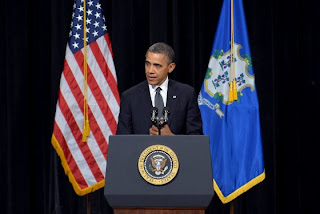 President Obama's speech in Newtown, Connecticut, on December 16th, after the horrible events at the Sandy Hook Elementary School, has been praised as one of the finest speeches he has ever given. It was his "Gettysburg Address," according to biographer David Maraniss.

I, personally, found some of the President's statements hard to bear, given the time and place in which he made his pronouncements. The President told parents who had just lost their children in an unfathomable act of "carnage," as the President properly called it, that we "know" that the troubles we bear here are "momentary," and that "if the earthly tent we live in is destroyed, we have a building from God, an eternal house in heaven, not built by human hands.”

I profoundly hope that is true. But it seems to me that an appeal in such circumstances should be to "hope," and not to an alleged "certainty," since about these things no one can truly be "certain," and since these are things about which no one can truly claim to "know."

What we can and do "know" is that we who are still alive are in this life together (as the President said), and that:

We can’t tolerate this anymore. These tragedies must end. And to end them, we must change.

I praise the President's speech for this call for political change, and not for its appeal to the conventional pieties that I believe can do little to console.

The "future of change" is a meaningful phrase for me.

Its import is revolutionary.

Let us not convert a challenge to genuine "change" into another kind of pious reference. There is a New Year just ahead.