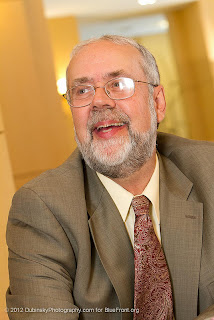 Most recently, you may have seen Richard quoted in articles discussing the expansion of the marine sanctuaries protecting the California coast. President Obama announced earlier this month that he would add 2,093 square nautical miles to the sanctuary system off California, expanding sanctuary protection from Bodega Bay in Sonoma County north to Point Arena in Mendocino County. Richard, who currently serves as a Senior Fellow at The Ocean Foundation, said that "this is an historic and globally significant piece of protection." It is also something that Richard Charter has been working to accomplish for about 35 years.

Properly given credit for this accomplishment are President Obama, who has used his executive powers to get around the refusal of the House of Representatives to extend the Sanctuary's boundaries, and Senator Barbara Boxer and Representative Lynn Woolsey, who have been working tirelessly in Congress to make this happen.

And Charter gets a large share of the credit, too - or ought to! Despite his current title as a "Senior Fellow" at a prestigious national foundation, Richard is the antithesis of an  "environmental bureaucrat." He has been working on protecting the California coast for a long time, and whatever his "job title" may have been (and Richard has had quite a few job titles, over the years), Richard has never ceased to be a "citizen activist" for ocean and coastal protection. In essence, Richard started out working on ocean protection as an activist, way back in the mid-70's, and he never gave up. The sanctuary protection that California now enjoys (and that definitely includes the establishment of the Monterey Bay Marine Sanctuary) can be attributed, in very significant measure, to the work of Richard Charter.

Richard's life story, in fact, demonstrates the power of citizen action, and I am proud to have been involved in that story right "at the beginning." Richard Charter's first actual job related to ocean protection was working as a contractor for Santa Cruz County, in a "local government coordination program" that I helped initiate as a member of the Santa Cruz County Board of Supervisors, and that I personally headed up for ten years or more, through several iterations of our local governmental efforts to save the coast. In giving me a slight advance warning of the great news about the sanctuary expansion, Richard said: "This protection is all your fault! This would never have happened without you, Gary."

In fact, that may be somewhat true, when it is understood that there is something called "cause-in-fact," which is quite a bit different from "proximate causation."My involvement in ocean protection is largely (though not completely) of the "cause-in-fact" variety. This is sometimes called "but for" causation, and in the law, it is usually not considered to be "enough" causation to assign any legal responsibility to the acts that fall within that definition. What counts, in the end, is not what "starts" a process, but what "ends" it, and processes of change are successful, in the end, not because of their beginnings, but because those involved refuse to "give up."

I do take some credit, and I am proud, personally, that Santa Cruz County decided, shortly after I became a member of the Board of Supervisors, that it would organize statewide (and ultimately nationwide) to protect the California coast. Santa Cruz County is the smallest county in California, and yet when we heard that President Jimmy Carter wanted to open our coasts to offshore oil production, in Outer Continental Lease Sale #53, the reaction of local citizens, and their local government, was not to "accept" this decision as a sad but inevitable capitulation to the oil companies - the greatest economic power in the history of the world. We said, "no." And we organized to stop the threats to our coast, and then we moved on to an affirmative program of coastal and ocean protection.

We, the people, changed the "realities" that no one thought could be changed. That is what I know is possible. I have seen it happen. Here's a salute to Richard Charter, one of the "agents of change" that made it happen!