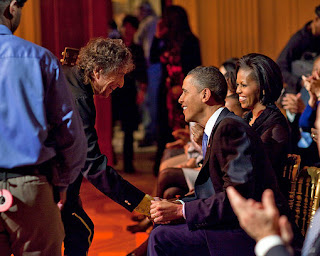 Mike Marqusee has written a fairly convincing analysis of Bob Dylan's politics in the blog Red Pepper.   In fact, he has written a whole book on the subject. Got to put that on my Christmas list!

Marqusee is a guy who thinks politics is important. He does not jump on Dylan for abandoning politics, either:

In these and other songs of the period, Dylan recoils with horror (and wit) from a public world poisoned by militarist patriotism and commercial hucksterism. Far from having jettisoned politics, Dylan was redefining its scope. In compositions like 'Visions of Johanna' or 'Desolation Row,' great social themes jostle with intimate grievances. When a disappointed punter at the Albert Hall called out for "protest songs," a frustrated Dylan replied: "Oh come on, these are all protest songs."

If Dylan hasn't abandoned politics, he definitely jumps on politicians, and he grants them no deference. That has been a theme that can be tracked from the start. In  Tempest, his most recent album, Dylan has never been more astringent. I think he likes our current President, but he's not about to let any politician off the hook:

Another politician pumping out the piss
Another angry beggar blowing you a kiss ...

Man can't live by bread alone
I pay in blood, but not my own.


If Dylan doesn't let those politicians off the hook, we shouldn't, either!