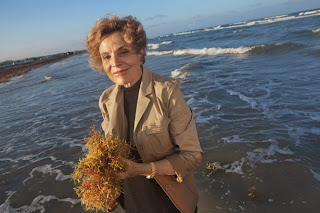 
Dr. Sylvia Earle, an "Explorer in Residence" at the National Geographic, came to Monterey on Friday November 2nd, to speak at a benefit for the Elkhorn Slough Foundation.

She said, among other things, that the last 10,000 years or so have been a kind of "sweet spot" for human beings, here on Planet Earth. For the last 10,000 years, natural conditions have favored the growth of our species (in prodigious numbers, actually). The climatic and other conditions that have supported this growth didn't always exist (and may not always exist). In fact, Earle noted that the changes that humans have made to the natural world have been greater in the last 50 years or so (less than the lifetime of an albatross, as she put it) than in all preceding periods. The changes she mostly talked about were not "good" ones, either. We are, in essence, destroying the world upon which we depend, and are doing so with incredible rapidity.

But Sylvia Earle was the opposite of a "gloom and doomer." She is, in this respect, a role model to which I might aspire.

The great thing, said Sylvia, is "now we know."

And now we can change.