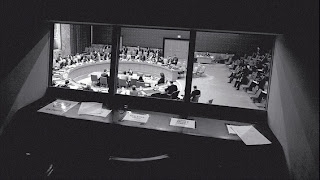 The image above is a 2005 press box view of a meeting of the United Nations Security Council, used as an illustration for Paul Kennedy's review of a new book.

Here's the pull quote I'd choose to synopsize Mazower's book:

The idea of governing the world is becoming yesterday’s dream.

Here's the context in which that quote appears:

In the ongoing atomization of society, citizens and classes have vanished as forces for change and given way to a world of individuals who come together as consumers of goods or information, and who trust the Internet more than they do their political representatives or the experts they watch on television. Governing institutions today have lost sight of the principle of politics rooted in the collective values of a res publica, even as they continue to defend the “civilization of capital.” As for the rituals of international life, these are well established. The world’s heads of state flock annually to the United Nations General Assembly. There are discussions of reform and grandiose declarations of global targets, which will mostly go unmet. Politicians, journalists, bankers and businessmen make their pilgrimage to the heavily guarded Alpine precinct of Davos, seeking to confirm through this triumph of corporate sponsorship that a global ruling elite exists and that they are members. Our representatives continue to hand over power to experts and self-interested self-regulators in the name of efficient global governance while a skeptical and alienated public looks on. The idea of governing the world is becoming yesterday’s dream.

I was convinced by Mazower's book that past and present efforts to "govern the world" have largely been efforts by powerful governments to support their imperialistic intentions, or (most recently) have been the "cover story" used by corporate capital to assert its primacy over the planet and all its peoples.

In other words, I think that the whole idea of "governing the world," as Mazower depicts this endeavor, is an enterprise that may well have been more "nightmare" than "dream," and that we are well served leaving that particular effort behind.

Of course, as we are all aware, the United States, in the Post World War II era, has become the main "governor" of the world. Our government has been captured by the corporate interests that are now "governing the world" in our name.

The revolution needs to begin at home.