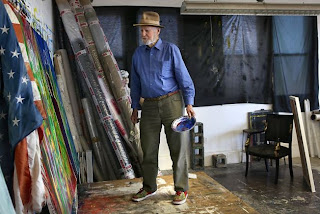 According to the San Francisco Chronicle, in a front page article in the Sunday, September 23, 2012 edition, Lawrence Ferlinghetti (pictured) has written a new book, to be released on October 24th. I really like the title, particularly as explained by the Chronicle:

The title of his new work, Time of Useful Consciousness ... comes from an aeronautical term denoting the time between when one loses oxygen and when one passes out, the moments when it's still possible to save your life.

Is that where we are?

Yes, according to Ferlinghetti: "It's a statement about where culture is..."