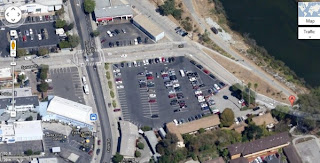 We live in a "political" world, and political choices determine our future.

Tomorrow evening (Tuesday, September 11th, at 7:00 o'clock), the Santa Cruz City Council is going to decide whether or not to invest over $4.1 million dollars (2/3rds of the city's financial reserves) to help construct a basketball arena on the outskirts of the commercial areas of downtown Santa Cruz, on land owned by the Santa Cruz Seaside Company.

I think that what is being proposed would be an imprudent investment of the city's financial reserves. If you are a City of Santa Cruz resident, and have a position, one way or the other, you should let the Council know. Reprinted below is my letter to the Council, outlining the reasons that I don't think that this proposed deal is a "good deal" for the City of Santa Cruz:

This letter is to express my personal views. I am a resident of the City of Santa Cruz, and I have an individual and personal interest in the City’s proper compliance with local zoning and other laws, and with the state’s environmental laws. I am also concerned, as a city taxpayer, that the Council not place the financial assets of the city at risk.

I understand that at its September 11, 2012 meeting the Council will consider two different agenda items related to a proposal to build a basketball arena on land owned by the Santa Cruz Seaside Company, located at the intersection of Front Street and Spruce Street, on the fringes of the commercial areas of downtown Santa Cruz. I have reviewed the agenda items made available on the City’s website (which do not include the actual legal and financial agreements that the Council is being asked to approve). I have also read with attention the news articles in the Santa Cruz Sentinel that have commented on the proposal. I was particularly struck by the following statement made by the City Manager (presuming that he was quoted correctly) in the September 8, 2012 edition of the Sentinel:

“This isn’t a money-making scheme for the city.”

If that is true (and I think the City Manager is right) why fund this effort?

Here are some of my specific concerns about the financial and business aspects of this proposed project, as the project is presented in Agenda Item #1. Again, neither I nor any other member of the public has had the benefit of reviewing the actual financial agreements that the Council would be endorsing, if the Council approves the recommendations before it. Perhaps my concerns would disappear if I were able to review the actual legal documents. More likely, my concerns would be even more focused and specific than the concerns I am presenting in the following list:

· The city is already running an “arena” business (the Civic Auditorium). This new arena on Front and Spruce will compete against the city’s own Civic Auditorium facility. That is problematic, in and of itself. In addition, the city has not made money on the Civic. If the city can’t make money on its existing arena business, why does anyone think that it can run two arenas successfully?

· Running the “arena business” will cost money. There are new costs for city staffing that don’t seem to be factored in.

· The current plan assumes that there will be parking available in the greater downtown area during the late fall and winter, when the Warriors will be using the Front/Spruce arena. However, there will be less parking available in the greater downtown area during the spring and summer months, when the general tourist trade ramps up. This means that there is not going to be much chance to attract lots of users during the “on” season of the year. Materials in the agenda packet indicate that UCSC might be interested, but I don’t believe that the campus fields sports teams during the summer. Has there been a formal revenue study, so that the Council can see likely revenues from the city’s operation of the arena during the Warriors’ off-season, and match those likely revenues against actual costs? There ought to be, before the city makes a commitment.

· If the city is actually going to go into the basketball/arena business, there should be a business plan in place before the Council commits two-thirds of the city’s financial reserves to what amounts to a high‑risk venture.

· How much will it cost to deconstruct and remove the arena facility at the end of the seven years? Who is going to pay for this? I presume that the city will pay for removal, since the city is going to be the “owner” of the facility. I bet the removal costs could be $500,000 or more. Has any study or analysis been done? The Council should have a good estimate of those costs, before it makes a commitment, since deconstruction and removal costs are a cost that will presumably be paid for by the city, and this is another cost that may well not be offset by the revenues that the business is going to generate.

· Has anyone noticed that the Seaside Company owns the land? At the end of seven years, faced with what could be very significant removal costs, the city may want to retain the arena on the Front/Spruce street property. But that property is not owned by the city. Unless the city has an option to lease or purchase the property, set now, the city will be at the mercy of the Seaside Company in seven years, since the city will have to pay whatever the Seaside Company demands, or vacate the property, and incur removal costs that the city may find are truly horrendous. Again, the Council should insure that this issue is fully dealt with in the documents, and that the city’s interests are protected, before it makes a commitment.

· As our community faces a genuine water crisis, I think it is unconscionable that the Council should be asked to excuse the Warriors from paying sewer and water fees. They will be using the water for their business. They should pay for it just like everyone else. Incidentally, the staff report says that these fees, owed by the Warriors, will be “deferred,” giving the impression that the Warriors will pay these costs, but at a later time. In fact, the staff materials also reveal that the city is planning to impose a $1.00 surcharge on each ticket sold, and to use this money to repay itself for the so-called “deferred” fees. In other words, the fans, not the Warriors, will be paying this bill. The fees that the Warriors should normally pay aren’t really “deferred,” at all; they are just going to be paid by someone else – those who attend the Warriors’ games).

· The plan to move 225 cars from the Seaside Company’s private parking lot at Front and Spruce Streets, and to give those cars free parking at the city’s downtown parking garage at Front and River should raise lots of concerns. The Front/River garage is in the heart of the downtown commercial district, and giving away parking places there could have really adverse impacts on the employees of downtown businesses, and on downtown business customers. In other words, if cars of workers who are working at the beach are allowed to take up 225 parking spaces in what amounts to the City’s prime downtown parking structure, the impact of this on downtown businesses may be quite negative. Has there been a study of the possible impacts of giving away these 225 parking spaces, looking forward over the next seven years? Until the Council really understands this potential impact, the Council should not make a commitment to the current proposal.

· Finally, it is being proposed that the Council “delegate” to the City Manager (with approval of the City Attorney) the details of the various lease and other agreements that will define this deal in legal terms. The Council should require that the actual agreements come before it, so the Council can assume full responsibility for its actions – and so members of the public can have a chance to see the details of the proposal, before it is approved.

In addition to great concerns about the financial and business aspects of the proposal before the Council, I am quite distressed by what I think is the noncompliance of the city with the requirements of the California Environmental Quality Act (CEQA). I also think that the city is, in effect, avoiding the provisions of its own zoning laws, since the proposed facility is not really appropriate for the RH zone district.

Specifically, with respect to CEQA, I do not believe that the proposed facility qualifies for a categorical exemption, as the Council has been advised. CEQA requires that an EIR be prepared whenever a proposed project “might” have a significant adverse impact on the environment. The parking analysis seems to be based on a 2,800-seat facility, but the facility will be able to seat 4,000 persons for non-Warriors events. This impact has apparently not been analyzed. This is not the kind of “infill” project that qualifies for an exemption. Predictable traffic and parking impacts translate into direct physical changes in the environment that are likely to be significantly adverse. The Council should not make a commitment to this project unless and until it undertakes a proper review of the environmental impacts of the project under CEQA.

I urge the Council not to proceed with the project as proposed. While I think that there are legal deficiencies, my appeal to the Council is mostly based on the lack of a business plan that shows that this investment of about two-thirds of the city’s financial reserve funds is going to have a demonstrably positive impact for the city.

Maybe this proposed project will have positive economic impacts; maybe it will “pay off,” and will represent a good investment of the city’s reserve funds. However, Council Members should pay attention to the remarks of the City Manager:

“This isn’t a money-making scheme for the city.”

When I look at the future, with respect to local government finances, I don’t see a rosy picture. Please don’t put two‑thirds of the city’s financial reserves at risk, on what amounts to a very speculative business venture.

That isn’t the deal that is before you on September 11th.

The Warriors have not asked the city for an “investment” or a “loan.” They have essentially asked that the City of Santa Cruz join them in the basketball/arena business, with the city bearing most of the risk.

Santa Cruz County Board of Supervisors