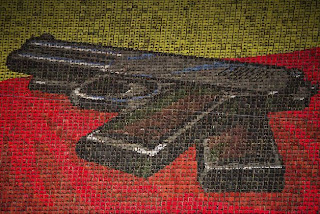 Each August, a festival involving more than 100,000 participants takes place in North Korea. I am relying on a report from last Sunday's San Francisco Chronicle in relaying this information. The festival typically involves choreographed gymnastics, dance, and drama that celebrate the nation's military and government leaders.

Shown is one of the many "card pictures" created by attendees, in an activity known to college football fans as a "card stunt." Back in my college days, I took part in those card stunts myself. Participants are provided with synchronized instructions, and as they follow those instructions pictures are produced, visible not to those who are producing them, but to the observers across the field.

In this case, as the participants follow their instructions, it is not the opposing team and opposing fans that are sent the pictorial message, but the world at large. I guess the message intended by this picture might be "watch out for North Korea."

The most important fact to me about this particular activity is that those who produce the effects don't know what they are producing. They just do what they are told. The totalitarian military and government leaders of North Korea decide what their people will produce. The people just follow instructions.

In fact, we do create realities by the actions we take together, and we often don't know what we are producing. Adam Smith thought, somehow, that individually-determined economic actions would always add up to produce something worthwhile, guided by an "invisible hand." I don't think that actually does work; imagine a "card stunt" where everyone flipped the cards in whatever order they pleased. The result would not be a coherent picture, though it might be beautiful in its own way.

If we want to act together to produce something coherent, there need to be instructions, and we need to follow them. If we don't like the totalitarian approach, then we need democratic decision making. We would still need to flip the cards when we were supposed to do so, but the instructions would be coming from those doing the flipping, not from some "leader" who decides what our activities will produce.

In that system, we'd get to choose, together, what pictures we want to display to the world, what realities we want to create.

I doubt we'd choose to display a gun.