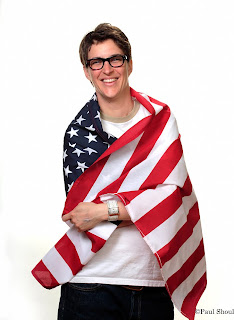 Rachel Maddow's personal website identifies her as the host of “The Rachel Maddow Show,” which airs on MSNBC at 9:00 p.m. Eastern time, Monday through Friday, and is rebroadcast at midnight Eastern. Maddow lives in New York City and Western Massachusetts with her partner, artist Susan Mikula. Mikula's work tends to be dreamy and diffuse. Maddow likes to make things clear.

Maddow's latest book, Drift, makes clear that the United States has become, without a vote, what amounts to a "national security state." That's her term, and here is what she says about it:

As the national security state has metastasized, decisions to use force have become painless and slick, almost automatic. The disincentives to war deliberately built into our American system of government - particularly the citizen-soldier, and leaving the power to declare war with Congress instead of the president - we've worked around them. We ought to see that constitutional inheritance as a national treasure, yet we've divested ourselves of it without much of a debate.

If we we are ambitious to be citizens again (citizen-soldiers or just the plain vanilla variety of citizens), we've got a lot to do. Maddow spells out a program to shrink the cancer on pages 249 through 252.

I think the title is wrong. We're not "drifting." But we are heading in the wrong direction (fast).